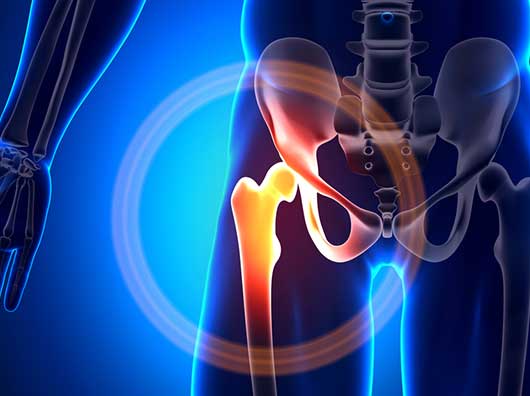 Anatomy of the Hip

The round head of the femur rotates and glides within the acetabulum. The depth of the acetabulum is further increased by a fibro-cartilaginous labrum attached to the acetabulum. The neck of the femur connects the femoral head with the shaft of the femur. The capsular ligament of the hip joint attaches to the posterior part of the femoral neck. At the top of the femur, next to the femoral neck, there is another bump on the outside of the hip called the greater trochanter, to which muscles attach. The greater trochanter serves as the site of attachment for the abductor muscles. The stability of the hip is increased by the strong ligaments that encircle the hip. The muscles of the thigh and lower back work together keep the hip stable, aligned and moving. A slippery tissue called articular cartilage covers the surface of the ball and socket. Cartilage helps prevent friction between the femoral head and the acetabulum, and hip pain can occur if cartilage begins to wear down or is damaged.