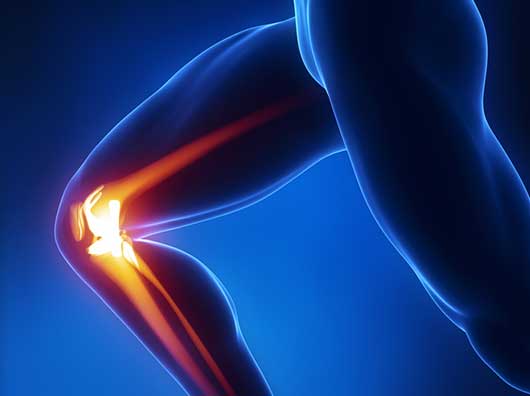 Anatomy of the Knee

The knee is a complex pivotal synovial hinge joint in the body. It connects the bones in the upper and lower leg, comprised of muscle, ligaments, tendons and the meeting of four bones: the femur, tibia, fibula and patella. It is the largest joint that flexes, extends and twists slightly from side to side in the body. The knee joint is comprised of many components, making it vulnerable to a variety of injuries. The knee joint is cushioned by articular cartilage that covers the ends of the tibia and femur, as well as the underside of the patella. The lateral meniscus and medial meniscus are pads of cartilage that further cushion the joint, acting as shock absorbers between the bones. Tendons are tough cords of tissue that connect muscles to bones.

Two groups of muscles are involved in the knee joint. These are the quadriceps muscles (located on the front of the thighs) that help to straighten the legs, and the hamstring muscles (located on the back of the thighs) which bend the leg at the knee. There are four main ligaments that play a critical role in controlling motion by connecting bones and by bracing the joint against abnormal types of motion.

On the sides of the joint lie the medial collateral ligament (MCL) and the lateral collateral ligament (LCL) that stabilize the knee against angulation (tend to wedge open the joint) and translation (tend to slide the bones in opposite direction) forces. The anterior cruciate ligament (ACL) is located in the front part of the center of the joint. This ligament is a very important stabilizer of the femur on the tibia and serves to prevent the tibia from rotating and sliding forward during agility, jumping and deceleration activities. Directly behind the ACL is its opposite, the posterior cruciate ligament (PCL), which prevents the tibia from rear sliding.

Being the largest joint in the body, the knee is critical for everyday functions such as standing, sitting, walking, running and jumping. It provides the flexibility necessary to walk and enough stability to bear the entire body weight while standing up.