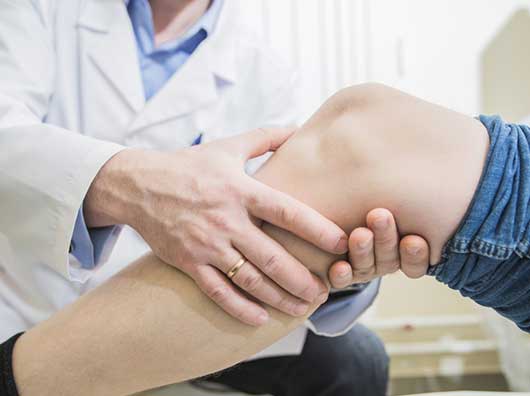 The number of hip and knee replacements performed in the United States has increased exponentially in recent years. An estimated 7 million Americans are living with an artificial (prosthetic) knee (4.7 million) or hip (2.5 million). Approximately one million of these procedures are performed annually. The vast majority of these surgeries are very successful, and patients go on to live fuller, more active lives without pain. But no operation is without risks. One of the major risks facing patients who undergo surgery in the lower extremities is a complication called deep vein thrombosis (DVT), a form of venous thromboembolic disease.

It is well established that DVT occurs most frequently as a postoperative complication, particularly after orthopedic surgery. DVT occurs when a blood clot forms in one of the deep veins. This can happen if a vein becomes damaged or if the blood flow within a vein slows down or stops. Blood clots can be serious complications of orthopedic surgeries like joint replacement or surgery to repair knee, hip or other joints. With DVT, a blood clot forms in a deep vein – often in the leg – and can result in serious illness, disability and even death. A serious complication of DVT is pulmonary embolism. It occurs when part of the clot breaks up and travels through the bloodstream to the lung, which often leads to a serious outcome. Although venous thromboembolic disease can develop after any major surgery, people who have surgery on the lower extremities are especially vulnerable to DVT.

There are three major factors that contribute to formation of clots in veins leading to DVT:

Damage to the vein walls

During surgical procedures, the orthopedic surgeons retract soft tissues such as ligaments, muscles and tendons to reach the area that requires surgery. In some patients, this can also break intercellular bridges and release naturally occurring substances that promote blood clotting.

Hypercoagulation is an increased tendency of the blood to form obstructive fibrin fibers and clots. During total hip and total knee replacement surgeries, multiple factors such as endothelial injury and platelet activation disrupt the regulatory mechanisms of hemostasis, leading to the formation of blood clots. In addition, tissue debris, collagen or fat may be released into the blood system, which can cause the blood to coagulate. Moreover, during surgery, reaming and preparing the bone to receive the prosthesis may cause the body to release chemical substances called antigens into the blood system, which stimulate blood coagulation.

Blood stasis is a condition of slow blood flow in the veins, usually of the legs. It is a risk factor for forming blood clots in veins. It prevents naturally occurring anticoagulants from mixing in the blood. Blood that does not flow freely and does not mix with anticoagulants may be more likely to form blood clots. Prolonged bed rest or immobility or inactivity promotes stasis, leading to DVT.

Other factors that may contribute to the formation of thrombi in the veins include: