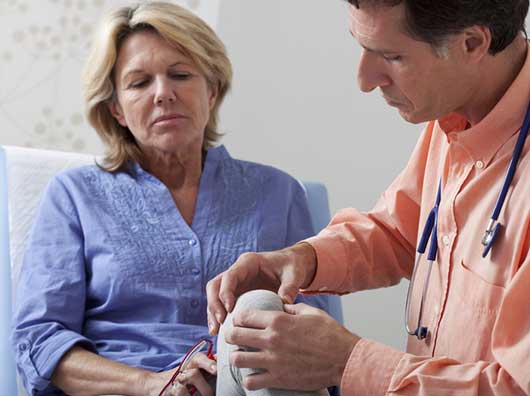 Osteochondritis Dissecans of the Knee

Osteochondritis dissecans (OCD) is a joint condition in which bone underneath the cartilage of a joint dies due to lack of blood flow. The most common joints affected by OCD are the knee, ankle and elbow, although it can also occur in other joints. It is characterized by sequential degeneration or aseptic necrosis and recalcification. Consequently, a small segment of bone begins to separate from its surrounding region due to a lack of blood supply. As a result, the small piece of bone and the cartilage covering it begin to crack and loosen, causing pain and possibly hindering joint motion. OCD may lead to degenerative changes if left untreated.

OCD occurs most often in children and adolescents. It can cause symptoms either after an injury to a joint or after several months of activity, especially high-impact activity such as jumping and running, that affects the joint.

The causes of OCD remain unclear but orthopedic surgeons believe that repetitive physical trauma, ischemia (restriction of blood flow), avascular necrosis (loss of blood flow), rapid growth, imbalances in the ratio of calcium to phosphorus, and problems of bone formation play a critical role in the development of OCD. Repetitive microtrauma may alter the bone growth by interrupting blood supply to the subchondral bone, leading to the development of OCD. Current research suggests that some individuals may be genetically predisposed to OCD.

It is thought that repetitive microtrauma, which leads to microfractures and sometimes an interruption of blood supply to the subchondral bone, may cause subsequent localized loss of blood supply or alteration of growth.

The symptoms of OCD vary with the stage of the lesion. In the knee, lesions early in their course are associated with vague and poorly defined symptoms. The symptoms start out mild and grow worse with time: